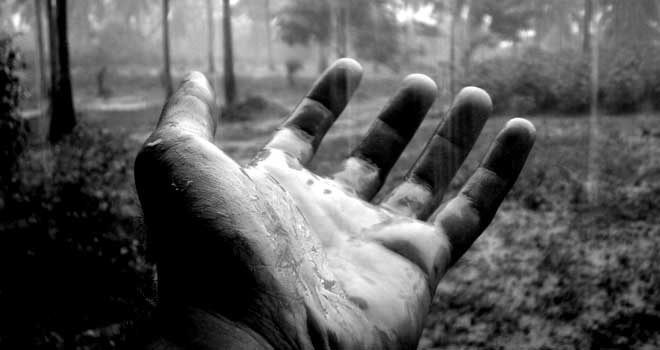 The 1st drop goes unnoticed, it’s not until after it’s raining that you look back and say, “yes, that is when  it begun”.

You notice the 2nd & 3rd, but you’re not sure it’s rain so you hold out your hand, and as you collect a few drops you look skyward just to be sure.

A few splashes on your face later & it’s confirmed, It’s raining. The choice now, is whether you do something about it or do you ignore. Do you change-up? Put on that jacket, run, seek shelter. Or do you ignore it, pushing it to the back of your mind & continue as before.

Choices, Change, and the ideas that led to them… for me they’re a lot like raindrops. By themselves they mean nothing, but when a few of them land on you, you’re brought to a place of choice.

I think the 1st raindrop was back in 2001, although I didn’t realize it then, nor could a fully articulate what I was trying to say.

I recently stumbled onto some old photos I once had in an exhibition in ’01, it was a doco-style series, “out of sight, out of mind“. It followed a sheep through a small abattoir. I remember one young boy of about 8yrs hitting the pictures on the wall, yelling at the “evil bad man” while his mother tried to pull him away & explain it was just art. Both were wrong.

Like that little boy you might not like the pictures below, feel free to scroll down to the next chunk of text. Apologies for the quality, these were taken with my phone. Some of these are test prints, some final, a sample  from the series Out of sight out of mind. Unfortunately I no longer have the final image. 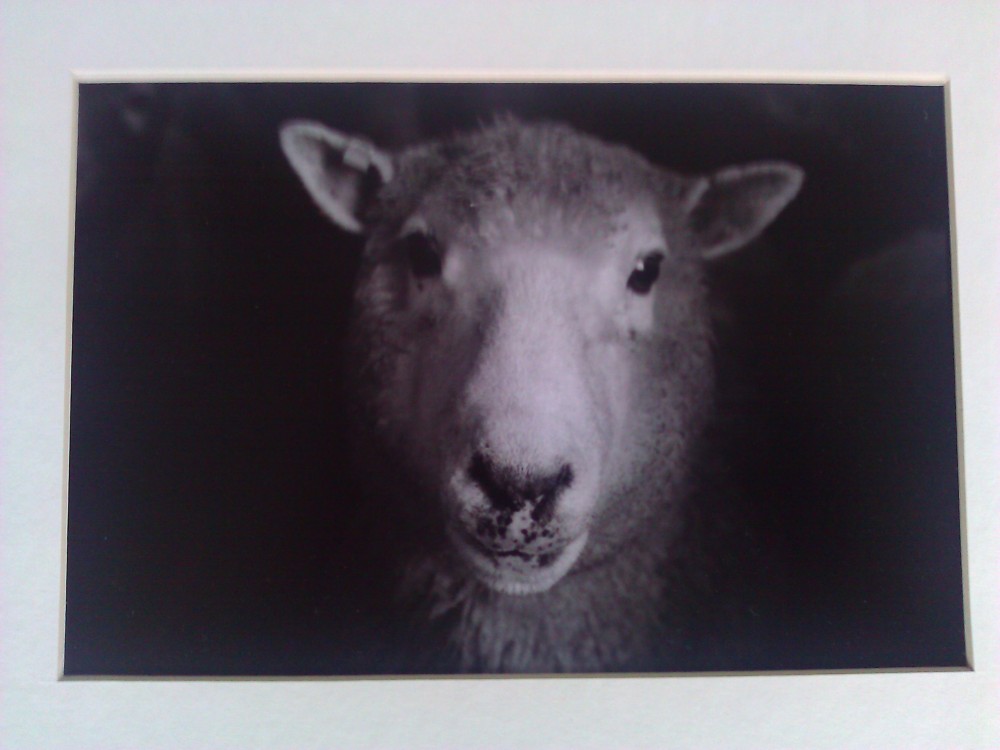 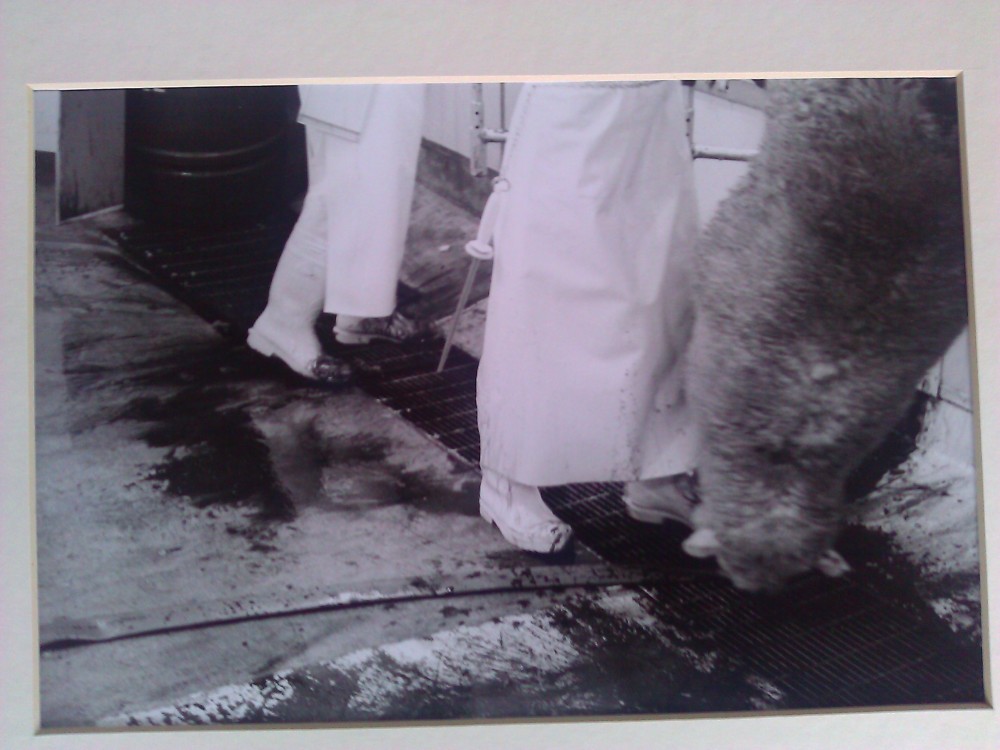 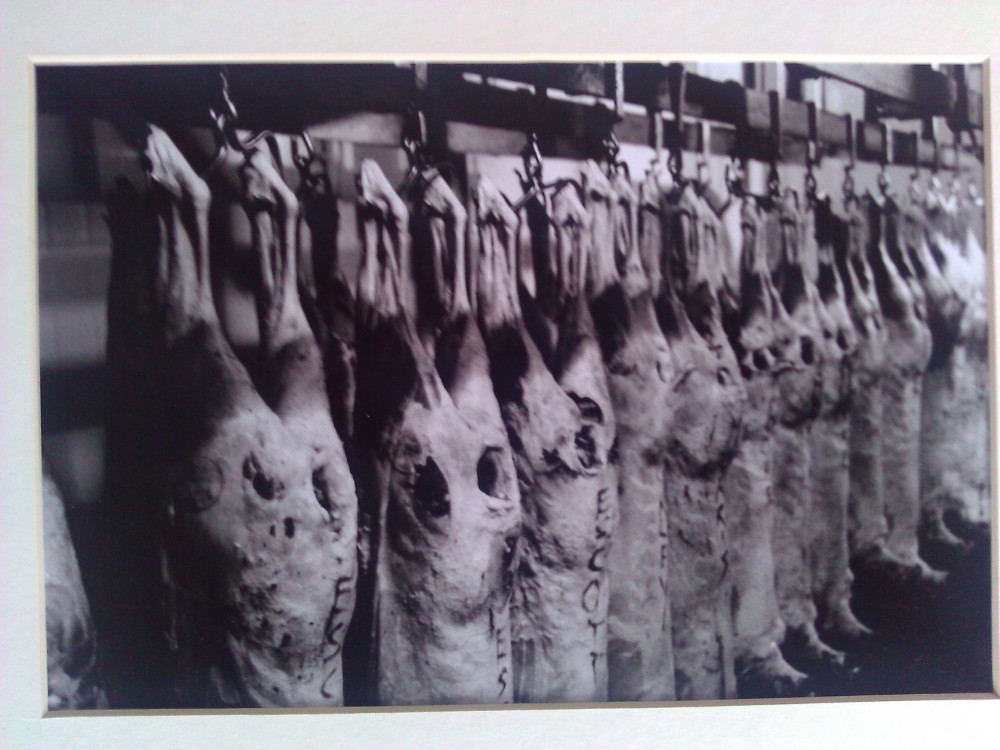 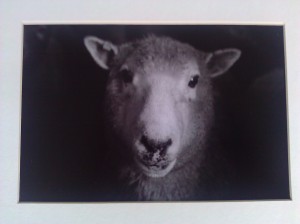 The series finished with the a photo of the very 1st image (above) fashioned into a plate with a lamb chop on it (it’s been misplaced along the way).

The images weren’t meant to shock, or turn people off meat, or protest animal cruelty. It was a simple statement that we often don’t think about where stuff comes from or how it gets to us…

out of sight, out of mind.

A few years ago I finished a period of study which radically altered my view on Christianity, God, the world & my place in it. And on commencing paid employment and finally having a disposable income, questions began to pop into my mind about what I was doing with my money, what was I endorsing or supporting with how I spent my wealth.

The other day I read this, it about sums it up.

“Every time you spend money, you’re casting a vote for the kind of world you want”

It seems a long time since I posted tree hugging conspiracy, I just reread it, it brought a smile to my face. This week I’ll be blogging about some other changes, the raindrops that led to them & whispers of things to come.

I need this, you see, I’m not normal.  (yeah i’ve been a little slow to realize this)

I’m not sure when this happened or how, if it was a gradual process or it happened at birth, but there is  much which doesn’t make sense to me.

So many things which seem normal to everyone else.

Because the one thing I need to do after the day I just got a whole lot of new stuff is to go shopping for even more new stuff, stuff that I need.

Can you believe that there were traffic problems! That some(1:04) had to wait for a park… for FIVE MINS! Outrageous! (1:16) No air-conditioning in our malls! In this day and age?! Disgusting!

It’s an absolute travesty that people have to wait longer than 5 minutes, or even in the heat for things they need….. 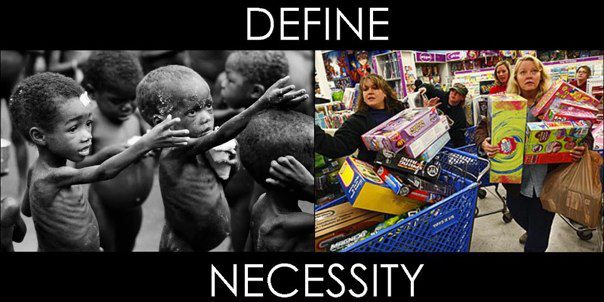