Last night I went out for dinner, which I’m aiming to do at least once every place I visit, but financially most of my meals will make use of my newly acquired minimalist skills. Anyway I had one of these, it’s a bloody marry with bacon (because it’s not American if you can’t add bacon), it also had olives, blue cheese, beans & shrimp. 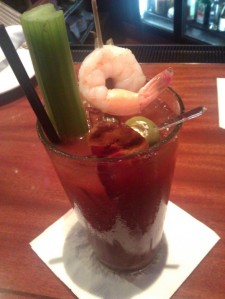 Said beverage drew the attention of the couple next to me (much like it drew my attention in the first place), we ended up talking & one thing led to another… no not like that, honestly I wonder who my readers are sometimes.

Long story short, she works at Alcatraz & I’m heading there tomorrow, so my day kinda went like this.

Got up really early to beat the masses, my info had been left at the ticket pick up so I could change my ticket to the first trip. The boat docks, and she’s standing there, she says I’m with her & I’m one of the first off the boat. Everyone else goes right & waits for the boat to unload to have a briefing, she says to do the audio tour later, miss the briefing, obey the signs, stay on the path, head left.

So while I can’t get into the cells before anyone else, I still have a blast wandering the parade ground & exercise yard solidarity. Not to mention it’s any photographers dream to be able to shoot tourist attractions without the tourists.
I work my way back to the beginning then do it properly, the audio tour is a must.

I spend about 4 hrs on Alcatraz, by which time it’s swarming with people (1000+ easy), then I head to the Golden Gate Bridge & shoot a couple of time-lapse series. I’ll add them when they’ve been edited.

then stumble on to these tasty treats.

Surprise: I enjoyed learning about some of the islands non-prison history, in-particular the Native American protests.

Traveler Tip: Alcatraz – get on the 1st boat, miss the briefing, you catch a later one if you want, head left (like you’re going to the smokers area but keep going). Enjoy, after that 290+ people are dropped off roughly every hour.

High: Sitting by myself in the exercise yard

Low: So I chose a 4 bed dorm hoping it would be quite, turns out there are two snorers & a dude with a sleep-apnea machine… sounds like someone is dueling Darth Vader with a chainsaw.