I remember studying Russia in history, it was one of my favorite subjects. Revolutions, Communism, Stalin, secret police… I always thought Soviet Russia would have been a cool era/place to visit, I will never get to. But I imagine I’ve come close…

I’ve had the opportunity to fly both to, and within the U.S, before & after 9/11. I remember bracing myself for craziness in post 9/11 2003 & being really surprised by the lack of security (with the exception of one internal flight to New York, where I had to go through security twice… long story).

So I was a little surprised by how amped up everything is now 10yrs later.

I can look past taking my shoes off, stripping naked, getting bomb tested & patted down at every airport check-in (ok the naked part is a joke, but sometimes I feel it would be easier to go through security in my pj’s & get changed after). I can ignore the cattle-herded lines, flipping gates & barking orders.

But the constant “report anything suspicious” PA announcements, the sign in the bus that reads “your image & voice may be recorded… Voice?!! wtf! what’s that about. The poster which reads “Can you spot what’s out of place?”, “Take a moment to observe your surroundings and report all suspicious behavior”…. well all that, that just feels like,

Welcome to the United States of Soviet America!

Just when I’m about to lose all hope, the guy barking at the cattle line cracks a joke, “Guy’s you don’t need to take your wedding rings off, I know you want to, but you can’t use us as an excuse”, he then proceeded to make fun of a kid with some impressive hat hair.

I made a cover for my kindle. 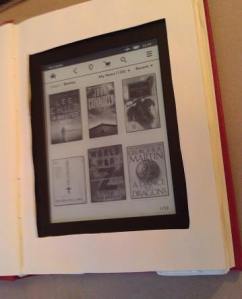 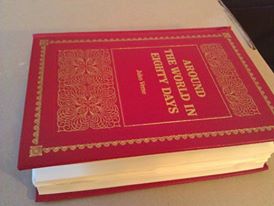 I like the book feel, I like the added protection. I always declare what it is  when it’s scanned. Security generally chuckle & comment on it (Uganda, Australia, NZ, UAE, Bangkok).

this conversation repeats before I eventually laugh & say, “If I was going to bring a malicious Kindle I wouldn’t put it in a book & I wouldn’t show you”.

I get the book back with some parting muttering. Most suspicious.

I’ve learnt that inside the US honesty is not the best policy, I’ve since taken 4 internal flights where I’ve gone through security (one to New York) and have just left it in my carry-on bag without any questions. The secret to smuggling Malicious Kindles it seems, is don’t draw attention to them & don’t show anyone.

I land in LA, am fortunate that my transfer gate is next door & 15mins later I’m on my way to San Francisco. I arrive pretty sleep deprived, so consider it a minor miracle that I can figure out public transport to BART(speedy train) & bus my way to my accommodation.

That night I wander around the piers in the drizzling rain, there are not too many people around, it’s a refreshing change from the madness of Waikiki… almost as refreshing as the crisp air (6 deg.Celsius).

Low: Airport Security… I wonder how many times this will make the low column.

Surprise: all the seals around Fisherman’s wharf, fighting & barking for position, power & female attention… not too unlike ourselves 🙂