I departed on the 30th & arrived in Hawaii on the 29th – I love time travel! I’m here for 3 things, lazy-relaxing beach days, hop in a cage with sharks (I just reread that, the sharks are preferably on the outside of the cage) & a visit to some Lost film locations.

I descended upon Ohau on a rain filled cloudy night, so unfortunately I see nothing flying in. My cab driver offered to pick me up tomorrow & drive me around the island for $200, once he saw where I was staying he suggested I could do the same on the bus for $2.50… yep I’ll be taking the bus, which funnily enough, is called ‘The Bus’.

Loaded up on a complementary breakfast of peanut-butter & toast, I knock out a quick 3k walk to Ala Moana mall.

Yes a mall, I’m disappointed in myself – disgusted actually.

It’s kinda cool that it’s an “outside mall” (not enclosed), but not really practical on this overcast-showery day – just what I came to Hawaii for. I head straight to the Microsoft store to grab a case I’d ordered for my tablet… the beautiful contraption I’ll be blogging & editing video on.

At some stage I saw a pic of a Japanese styled place & thought it would be a sweet place to visit, chill, photograph & reflect. Google told me it was Byodo-in temple, it’s Buddhist & modeled after one in Japan.

But during my googling I also found this one, which was a perfect backdrop for a couple of lines of spoken word I was wanting to film in front of a few places.

In search of my mythical temples I attempt to jump on a bus, only to realise the driver can’t break a ten because they don’t handle money, you need exact change to pay a machine (guess you can’t trust those bus drivers). Not wanting to wait another 90 mins I say, “don’t worry about the change”, at which point she let’s me on for free – Jurassic park!

Celebrations are short lived when I realise this bus won’t get me close enough. I jump off at the highway – which has a footpath – it’s a little disconcerting walking down a highway with a 10ft tall sound wall on oneside & 8 lanes of traffic zipping by on the other.

Eventually it looks like the footpath runs out, oh wait is that it over there? It must continue down below the highway  that’s much safer? This path isn’t well looked after, is it even a path? maybe it’s a drain… whatever it is, hopefully it runs the length of the highway. 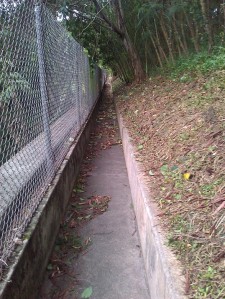 Just as well I’m a traveler today, a tourist would be lost. Travelers don’t get lost, where ever they are is where they’re meant to be. Which is good, because the Santa-sized American man, standing in just his board shorts looks very surprised that I’ve walked into his back yard, “I guess that’s not a path then”… his name’s Rick, I have a beer by his pool.

Full of liquid courage & directions to a bus to return me home, I head on my way.

After a small eternity I duck into a Mexican restaurant to grab a Powerade, it’s run by a lovely Mexican couple. Diego is into ball, he asks if I play… we talk ball, Hawaii, life & family. He has a 30yr-old son who hasn’t settled down yet, seems too interested in traveling the world… I think Diego would get on famously with my parents 🙂

I eventually get back to the mall & celebrate the day with a visit to Bubba Gumps, I’ve failed to reach my destinations today, but have had a couple of magical moments meeting new people. I could live a million lifetimes & never run into Rick & Diego, I’m much richer for it.

Walking home I pass some homeless people… then some more…

plans are for tourists, & I’m traveling 🙂

Low: I spent about 5months in NZ searching for a Tripod Mount for my GoPro & finally got one, only for it to break the first time I went to use it.

Biggest Surprise: Wow! there are a lot of homeless people in Hawaii