I started playing basketball when I was 11, I’d just started a new school, the 1st one I’d attended that had a basketball court. Even better it was outdoors, so I could play all the time.

Two weeks is the record. I once wore through the sole of a cheap pair of bball shoes in two weeks (I must have been pivoting more than Hakeem), I can remember the skin on my foot pinching between the ever-widening hole in my shoe & the court as I ran around. They were the shoes that broke mum & dad, shortly there after I received my first pair of Nikes.

During that winter, with the weather not so endearing to outside hoops I found myself watching the ’92 Olympics, in particular the Dream Team. Magic Johnson may have been the first player I’d ever heard of, but Michael was the first I fell in love with. I remember the exact moment it happened, first game against Angola… long outlet pass, over-the-head lob…

11 years later I was making my second trip to the U.S, my first to see Jordan play… 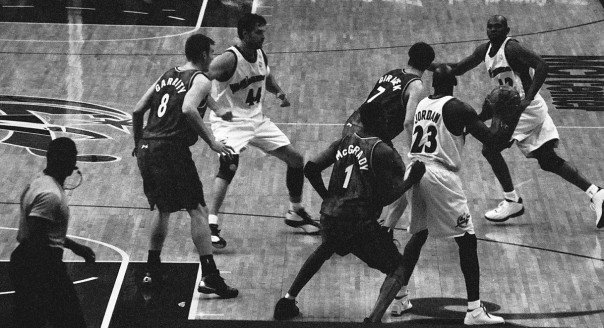 So yeah, I’m a Jordan fan… I have the college jersey, the Olympic jersey, the rookie jersey, the shoes, clothes, posters, books, cards, dvds, games… when I was 12 I forked over $100 of my hard-earned paper round money for this game, Michael Jordan in Flight, then another $100 to upgrade the RAM on our computer from 1mb to 2mb so I could play it (yes you read that right $100 for 1 megabyte). Check it out in all its glory 🙂

So for me my relationship with Basketball, Nike & Jordan began at the same time. It’s been a 20yr love affair.

Sweatshop. I have some vague recollection of that word being associated with Nike, but never really thought about it.

So what brought Nike to the forefront of my mind?

First released in ’96, the retro release was in 2000. They were the first Jordans I purchased,  1 weeks paycheck.

They were released again 23, Dec, 2011. If you didn’t hear there were some pretty crazy stories… pepper spray, fights, shots fired, a mother arrested for leaving her young kids locked in the car… some of it has to be seen to be believed.

Unsettling. Getting a pair of shoes is more important than helping someone off the ground. What do we value?

How much of this lays with Nike? “The marketing campaign for these shoes is essentially akin to yelling “fire” in a crowded movie theater” – Jemele Hill, ESPN.

Then there is this incredible story. If you take nothing else way from this post, watch this.

I’d also discovered Oxfam had been working for the rights of Nike factory workers for some time, which brought me to this dilemma… I donate money to Oxfam, I buy Nike products. Isn’t that a bit like starving my dog & donating to SPCA or beating my wife & giving to Womens Refuge? Do I care enough about the nameless, faceless in another country to change?

Or are my donations just “Conscience Tax”, like that yearly charitable Christmas donation to appease your conscience while you enjoy the season of gluttony & greed, when really the thing that offends you the most about the poor is not the poverty…  but that you can see them.

What happens when something you love comes in conflict with your values  beliefs?

Why, you try and justify it. So I went searching, I really wanted to like Nike, I found lots of reason to do so… Nike raised the minimum age of factory workers to 16 & more recently by signing an agreement to allow workers to form unions… and the Environment!  This nice Nike commercial sums it up.

Nikes gone green, green is trendy. And while its awesome Nike have made some changes I find I can’t get past this.

Agreeing to pay your workers the minimum wage is great, but if that minimum wage is not something you can live on & maintain your humanity, how do you justify that? Especially if your in a position of power & influence and your company turned 20 Billion in revenue with a 2 Billion profit.

What do I do, do I stop purchasing Nike & Adidas products? (I haven’t talked about Adidas, but for all intents & purposes they’re the same as Nike when it comes to human rights.) 95% of all my basketball gear is Nike or Adidas, I want to get a new Bulls Jordan jersey & saw some real sweet Nike kicks yesterday, not to mention that I’ve played basketball in Adidas or Nike for the last 6 years… and doesn’t everyone do it? Reebok was brought out by Adidas, Converse by Nike… of which Nike says two-thirds of its factories don’t meet Nike standards… so they’re worse?!

Often problems seem bigger than us… it’s because they are.

So you do what you can do. For me, I’ve decide to end that 20yr love affair, I’ve decided not to purchase any Nike or Adidas products. As for my current stock, well I have some creative ideas, stay tuned 🙂

I’m stoked Nike has shown it can change…

I look forward to the day treating people as human becomes trendy.